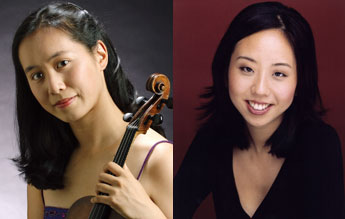 Canadian musicians Sharon Wei and Angela Park have captivated audiences around the world through their unique interpretations of the viola and piano repertoire from Bach to new creations.  Since their first collaboration in 1998, they have gone on to win such prestigious honours as the 2006 CBC Rising Stars Galaxie Award, a Debut Atlantic tour of the Maritimes, Canada and Ontario Arts Council career and touring grants, and in 2008 were selected by Chatelaine Magazine as one of “80 women to watch”.

They have performed on series including the Banff Centre for the Arts, the New York Viola Society Recital, the 2006 International Viola Congress in Montreal, CBC’s Music Around Us, the Arts and Letters Club of Toronto, Jeffery Concerts in London, Oakmont Series in California, Ottawa International Chamberfest, Stratford Summer Music, and at Yale University.  Their performances have been recorded and aired on CBC Radio.