A conversation with VC2 cello duo

IN THEIR OWN WORDS

Bryan
I actually didn’t pick the cello – it picked me. When I was in middle school I really wanted to play percussion. I have always had a suspicion that my Mother called the school and persuaded them to keep me away from the drums. So of course, I picked the next most awkward instrument: the double bass. A few months in there was an unfortunate incident where I dropped and broke the double bass. The next class I was given the cello and have stuck with it ever since!

Amahl
The cello makes a huge variety of sound from really beautiful to really abrasive without amplification or effects. It’s fun to experiment with as an instrument – learning how you can use your right and left hands in different ways to make different sounds.  It covers a lot of sonic real-estate. On a slightly more serious note, I like the cello because it’s the easiest way for me to fully express myself. It’s much easier to do that through the instrument than verbally or physically. It’s a tool, a catharsis.

ON WHY PEOPLE FIND THEIR CONCERTS BOTH FUN AND SURPRISING:

Amahl
People say, “I knew about the cello but didn’t know it could make so many different sounds, and play so many different kinds of music.”  We have a varied show. It’s not like a stereotypical classical concert. We don’t present a stuffy atmosphere in the way we carry ourselves or in the music we play. We create a partnership with the audience. We also provide anecdotes about ourselves and the composers. It humanizes the music and gives insight into who we are – two guys that play cello.

[After playing school concerts] we receive a lot of messages from students and teachers weeks after the fact, wanting more information. We cultivate a sense of discovery …. It gets the ball rolling. Kids go on the internet and see what else is out there. It fosters an interest in classical music, a push to search things out and discover for themselves.

ON THEIR CONCERT
MATERIAL, NEW COMPOSITIONS WHICH BOUNCE OFF THE WORK OF BEETHOVEN:

Bryan
Beethoven is such a monumental composer for both of us. He was one of the first musical entrepreneurs, and that is something that is easy to relate to given the current musical climate. Coming out of music school, students need to figure out how to market themselves. A number of composers in Beethoven’s time were supported by nobility, while Beethoven held few appointments and took pride in self producing concerts and publishing his own music. He was a savvy businessman on top of being an amazing composer.

The theme of the concert is Beethoven’s life and the cellists who surrounded him. There’s a great deal of storytelling about Beethoven, told from different angles. At the top of the concert we play a brief, comedic piece and talk about Bernhard Romberg, who Beethoven knew at age 17. Romberg was tough to get along with, although they had a good friendship. He always told Beethoven he didn’t like his music and that he would never amount to anything. Well, we know how that turned out! Romberg actually took Beethoven’s sheet music and stomped on it because he was frustrated by how difficult it was.

For this project we decided that the centrepiece would be a set of newly commissioned pieces based on Beethoven’s five monumental Cello Sonatas. The composers that we chose were also cellists with whom we had worked before – Matt Brubeck, Andrew Downing, Fjola Evans, Hunter Coblentz and Raphael Weinroth-Browne).

on the name of
their duo:

Bryan:
We went through a few different and somewhat embarrassing names before settling on this one. VC is the acronym of the full name of the instrument we play, the violoncello. VC is ordinarily how it shows up in an orchestral score … and there are two of us, so VC2.

ON THEIR
PERSONAL STYLE:

Bryan
I’m currently trying to step up my sock game.  At most shows I’ll be wearing very interesting socks. Aside from that I feel that we are both building quite the collection of plaid shirts…

Bryan
Getting new music and trying to sort it out. When we first got a lot of these pieces, for example the first one we received from Raphael Weinroth-Browne, the first thing that we both quickly had to get over was the volume of notes –  there are approximately…one billion. It took a lot of time to sort out how we were going to do it. There were a lot of hours spent rehearsing slowly with a metronome, tuning various chords – you name it. Only recently has the piece began to feel somewhat comfortable.

Amahl
A number of our composers don’t compose from a classical perspective. For instance, Andrew Downing is a jazz player who writes non-traditional jazz and scores for silent films. His music is quirky and cute, a bit off the wall, with interesting textures people may not have heard before.

on the two different stories of how they met

Amahl
I started my music degree late, and Bryan was finishing up his last few years on his degree. We got along right away and became friends.

Bryan
Amahl claims that he doesn’t remember, but we actually met in youth orchestra when he was 14 and I was 15. I barely knew how to read music and he had been playing cello basically since he had started walking. I didn’t like him because he was really good and I was terrible. Luckily years later we put that all aside. 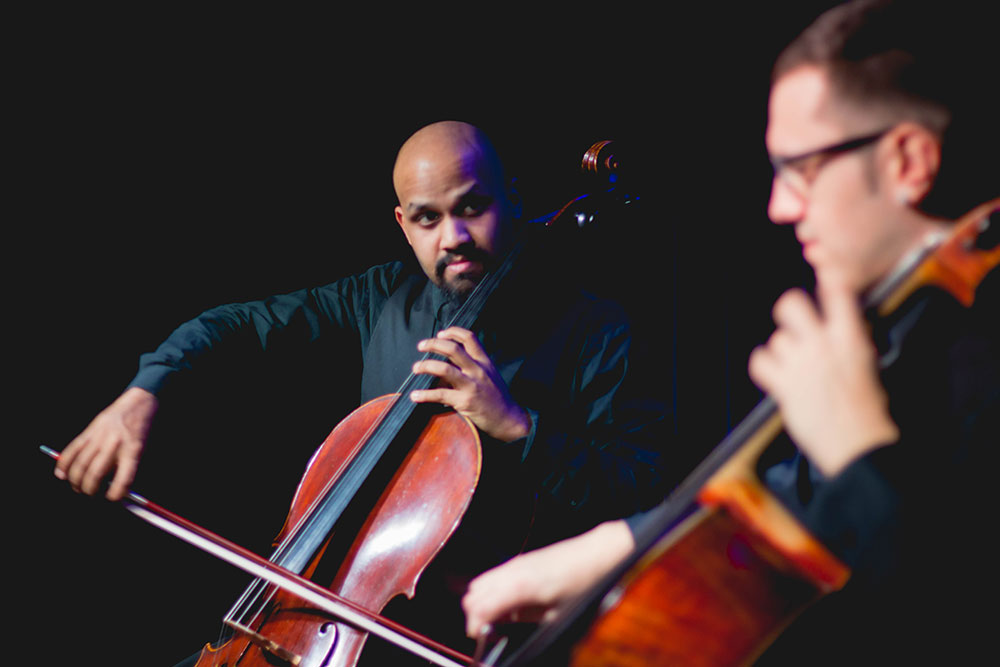 ON THE ADVICE THEY WOULD GIVE TO YOUNG MUSICIANS:

Amahl
You can’t get better without sounding bad first.  It’s ok to be bad at something for a little bit. You get better if you keep working on it. There are so many high-achieving kids now, they are afraid to fail at something, to not immediately be amazing. String instruments take time and patience.

Bryan
You need to learn all the rules before you can break them. In a number of these pieces we are technically breaking rules to make certain sounds that veer away from a typical approach. You’ve got to have the patience needed to learn all of those rules…then the real fun starts.

ON THE BEST ADVICE THEY EVER RECEIVED:

Amahl
If I want to do something I’ll make it happen in one way or another. This idea has been instilled in me by my parents and by teachers …. They were all big proponents of the idea that if you have an idea or vision, you have to do all that you can to make a vision the reality.  You are capable of doing it, even if you don’t think you are. Also, [to quote] one of our mentors, David Hetherington – ‘Try not to suck.’

Both Amahl and Bryan pursued other goals before committing to the cello – Bryan played A-level hockey, while Amahl considered a career in medicine.

Rehearsals often consist of four or five hours of practice broken up by a quick game of Nintendo or the latest video installation of EA Sports NHL franchise. “You have to take a break with something different so your brain doesn’t burn out.”

Their hobbies include watching and playing sports such as hockey, baseball and cycling, video games, yoga, and weightlifting.

“… It’s a testament to the type of eagerness – the kind of warmth and energy – that they bring to their music … They also clearly care, in a very earnest way, about what they do.  And it’s an enthusiasm that’s catching.”