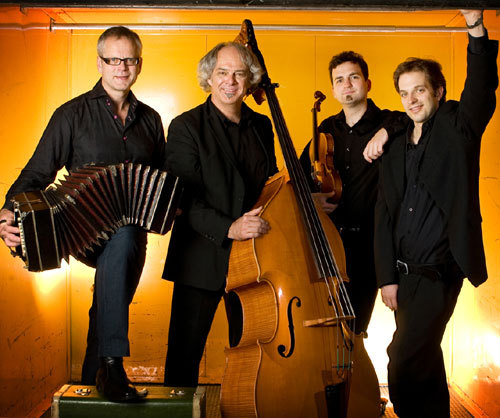 Comprised of four highly accomplished musicians, bound by their shared passion for the tango and driven by an unceasing desire to make a close connection with their audience, Quartango offers a performance filled with subtle nuances and a blend of colors that reflects both the classics and modernity and the effervescence of the milonga.

Quartango’s awards include three Opus Awards from the Conseil québécois de la musique, notably 2007/2008 Artist of the Year, a Félix Award and a Juno nomination. The ensemble also continues to delight critics and audiences alike: “The Montreal group heated things up with a concert that was nothing short of brilliant. It was dramatic. It was elegant. It was everything tango music should be,” wrote Kelly-Anne Reiss for the Regina Leader-Post following a concert.

Quartango has performed all over Canada as well as on the international stage, from Ankara and Tokyo to Taipei, Paris and New York, where they shared the stage at Carnegie Hall with the New York Pops. More recently, they performed in Guatemala and with the Buffalo Philharmonic Orchestra under the direction of Maestro JoAnn Faletta. “With elegantly flawless arrangements full of sensuality and wry humour, this group of classically trained musicians infuses the tango with a fascinating mixture of pathos and heat -The story these four musicians tell on Astor Piazzolla’s Adios Nonino is breathtaking. The violin and bandoneon are like plaintive lovers, with the piano narrating the scene as the double bass wickedly plays the devil’s advocate. I swear it’s palpable,” said Harold McNeil, news staff reviewer for The Buffalo News.

Quartango has recorded six CDs on the Justin Time label that have been acclaimed for their quality and originality. Their most recent disc, El Fuego, will be available in September 2009 and will also mark the group¹s 25th anniversary. Radio-Canada and the CBC have broadcast many Quartango concerts and the group also appeared on the CBC Television program Opening Night. As well, Quartango appeared in and provided original music for the soundtrack of the film Macadam Tango, which aired on Radio-Canada television and TV5.

Invited by major orchestras and festivals

Renowned for its performances with many important North American symphony orchestras, including Orchestre symphonique de Montréal, Orchestre symphonique de Québec, the National Arts Centre Orchestra in Ottawa, the Edmonton Symphony Orchestra, the Regina Symphony Orchestra and Orchestre Métropolitain, Quartango also wowed the critics at the Montreal International Jazz Festival, the Ottawa Chamber Music Festival, the Orford Festival and the Festival international de Lanaudière. In the summer of 2008, over the course of three concerts with the OSM, the quartet won the hearts of some 40,000 people with their contagious charm.

A rich and innovative repertoire

Quartango’s vast repertoire is characterized by refined musical arrangements, full of energy, the majority of which are the creations of pianist Richard Hunt (who has also composed some 20 original works for the group). While these arrangements explore Astor Piazzolla’s tango nuevo, they also include hints of the classics, jazz and Celtic music that are as subtle as they are unexpected. Quartango sheds new light on the music of the tango, elevating it to an international level.