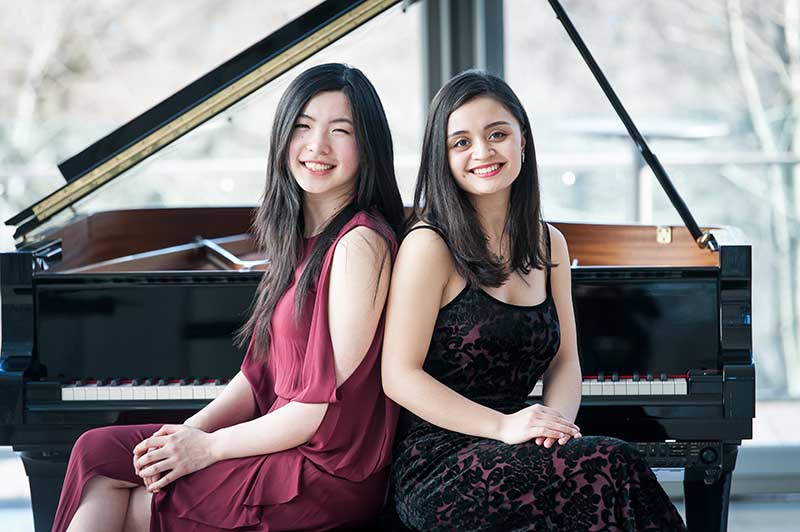 The three classical music organizations announced in October 2021 that they were teaming up again for a second edition of Road Trip! A Pan-Canadian Partnership to offer an emerging artist or ensemble a tour that would span the country.

“Given the impact the pandemic had on the artistic community over the last two years, we opened the call not only to young artists but also to professional musicians. Many worthy candidates and artistic proposals were submitted, but we felt that La Fiammata’s proposal was the strongest. Musically, they have a strong connection and their program blended contemporary composers with established landmarks for piano 4 hands. The duo made an immediate impression upon the jury,” says Danièle LeBlanc, Executive and Artistic Director of Jeunesses Musicales Canada.

La Fiammata concerts will explore the importance of community and shared experiences in life and the strength of the connections.

“La Fiammata is all the more interesting as they bring a broad perspective to their programming that strives to reflect the similarities and differences of Canada’s diverse regions,” says Erin Sparks, Executive Director of Debut Atlantic.

Road Trip! A Pan-Canadian Partnership will run between September 2023 and June 2024, and will include approximately thirty dates across Canada and the Territories.

“We are thrilled to offer this unique opportunity to La Fiammata, especially since emerging artists very rarely get to play tours of this scope”, adds Po Yeh, Executive Director of Prairie Debut.

La Fiammata
Praised for their “dizzying musicality” (Süddeutsche Zeitung), Canadian piano duo La Fiammata are the Second Prize winners, the Henle Urtext Prize winners and the youngest piano duo finalists of the 70th ARD International Music Competition. Since their formation in 2015, La Fiammata has quickly emerged as one of the most promising young duos in the world, garnering top prizes at the 2021 Lancaster International Chamber Music Competition, the 2019 Suzana Szörenyi International Piano Duo Competition, and at the 2018 Northwest International Piano Ensemble Competition. As the Grand Prix Winners of the Canadian Music Competition, La Fiammata made its orchestral debut with Orchestre de la Francophonie and conductor Nicolas Ellis in 2017. Since then, they have performed with orchestras in Europe and North America, and have been featured on the Canadian Broadcasting Corporation, BR24 Rundschau (Bavarian Radio), Art Channel Romania, and EnjoyTV Romania.

The duo was formed in Toronto where they were both full scholarship students of The Glenn Gould School. During this time, they primarily worked with James Anagnoson of the renowned Anagnoson & Kinton Duo. They have also received coachings from Anagnoson & Kinton Duo, Emanuel Ax, Hung-Kuan Chen, Michael Esch and John O’Conor. Currently, Ms. Ruan studies at the Tianjin Juilliard School with Dr. Xiaohan Wang and Ms. Vandikas at the University of Montréal with Jean Saulnier and Charles Richard-Hamelin.

About Debut Atlantic
Bringing Canada’s exceptional classical music artists to Atlantic Canadian communities since 1979, Debut Atlantic takes the guess work out of presenting excellence in the genre by curating a five-tour season of primarily emerging artists available to presenters throughout the Atlantic region. Debut Atlantic is deeply committed to educational and community engagement and artist development. Additionally, it offers an annual scholarship to an exceptional Atlantic Canadian high school music student.

About Jeunesses Musicales Canada
Jeunesses Musicales Canada (JM Canada) is a talent incubator that boosts the careers of the best emerging artists, while helping to democratize classical music for audiences of all ages. Today, JM Canada seasons include over 1 200 musical activities presented across Canada, ranging from high-calibre concerts to exciting musical activities for young audiences.

About Prairie Debut
The only organization of its kind in Western Canada, Prairie Debut connects Canadian global-music and classical musicians of the highest levels of artistic excellence to audiences in over 90 communities, most of which are rural and outside the larger centres in Manitoba, Saskatchewan, Alberta, and Northern Territories.

July 2017 Our 2018/19 Season will feature four touring artists. We are very excited to showcase their incredible talents at the fall booking conferences in Manitoba, Saskatchewan, and Alberta. Keep in touch to find out more about these musicians, showcases will be...

May 2017 | Po Yeh joins Prairie Debut as the new Executive Director, commencing July 2017. She comes to Prairie Debut from the Honens Piano Competition, where most recently as Director, Corporate & Community Engagement, she managed corporate development,...

The relationship of the performers and their passion for the music played is the foundation of Duo Milot & Bareil.

January 2017 | Prairie Debut’s first tour of 2017 will be the recorder quartet Flûte Alors! who will be performing in Manitoba, Saskatchewan, and Alberta this month.  Dynamic and versatile, Flûte Alors! is not afraid to push the limits of traditional recorder...

September 2016 | Duo Fortin-Poirier will begin Prairie Debut’s 2016-17 touring season, performing concerts in Saskatchewan, Manitoba, and Yukon. The duo, featuring pianists Amélie Fortin and Marie-Christine Poirier, has been heralded as one of the most promising of...

apply to tour with prairie debut

Each year, we invite emerging and established Canadian musicians to showcase and tour with Prairie Debut. World-genre and classical musicians who consider music to be their professional career are invited to apply to be part of our 2020-21 season.

When you choose to support Prairie Debut with in-kind or financial donations, you provide resources that helps our organization to connect some of Canada’s best world and classical musicians with thousands of people across Western Canada.
learn more

Want to know about upcoming concerts and new artists? You’ll get news and updates on Prairie Debut’s activities delivered right to your inbox when you join our mailing list.
SIGN ME UP