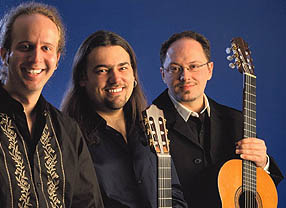 Described by the CBC as “the hottest guitar ensemble in Canada”, the MG3 has quickly established itself as a force of rejuvenation and cross-pollenization between various musical forms. Marrying passionate virtuosity with a stealthy sense of humour, guitarists Glenn Lévesque, Marc Morin and Sébastien Dufour at once charmed the ears of seasoned critics and captured the hearts of their (now ever-expanding) audiences.

The Trio’s eclectic, energetic music takes listeners on a journey through the world’s many cultures — from the mysterious, exotic melodies of India to the hot rhythms of South America, Spain, the Balkans, the Orient and traditional Quebec.

Since it was founded at University of Montréal in 1998, the MGT has given hundreds of concerts in North America and Europe, many of which have been recorded and broadcast by national networks such as CBC, Radio-France and Société Radio-Canada. Its 2002 concert, entitled “The heat of the Day,” and performed in Montreal, was nominated for Concert of the Year (Jazz and World Music) at the prestigious Prix Opus 2002, celebrating musical excellence in Quebec. This concert launched the Trio’s most recent album, Garam Masala, which was also nominated for Disk of the Year (J&WM).

“The Montreal Trio’s guitars know no limits. They journey along with brio from jazz to classical music, from India to Canada. The Ussac Church has been swept away on the thunder of their strings!” — La Montagne, France, August 2003

“…they delivered loads of infectious good humour and some solid ensemble playing that skirted the four corners of the musical world.” — Bill Rankin, Edmonton Journal, May 2004