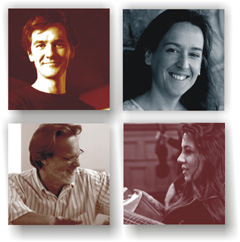 Founded by Francis Colpron in 1991, Les Boréades de Montréal focuses on early music. The ensemble has chosen an interpretative approach in keeping with the spirit of the Baroque era, by adhering to the rules of performance practice of the past and playing on period instruments. Critics and audiences alike in Canada and abroad have been unanimous in hailing the group’s energy and spontaneity as well as its theatrical, expressive and elegant playing, indicative of a unique flair for Baroque aesthetics.

Each year, Les Boréades gives a series of concerts at Montréal’s historic Notre-Dame-de-Bon-Secours chapel with international guest artists, many of whom have been picked up and broadcast by the national broadcasting corporation. The group has received many grants from the Québec and Canada governments and has toured extensively in Canada and abroad, taking part in several renowned festivals. The musicians also performed at the Frick Collection of New-York, Concertgebouw in Amsterdam, Salle Gaveau in Paris, Vancouver Festival, Musikfest Bremen and at the Alter Musik Regensburg.

Where does the name “Les Boréades” come from?

The Boreads (Les Boréades in French) were Zetes and Calais, the winged sons of the god of the north wind, Boreas. Their father was the son of Eos (goddess of the dawn) and of Astraeus. The brothers were Titans, beings who, in Greek mythology, personify the elemental forces of nature. Zetes, the more spirited of the two, was associated with quests. Calais, the temperamental one, personified the turquoise sea.