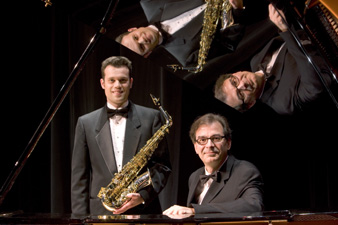 Canada’s leading young saxophonist, Allen Harrington, teaches saxophone, bassoon, and chamber music at the University of Manitoba, Faculty of Music. As “an extremely fluid player of superb artistry” (Thunder Bay Chronicle Journal), Allen has amazed and delighted audiences with his “honest sound, …radio-active resonance,” (Halifax Chronicle Herald) “considerable virtuosity,” “mellifluous tone,” (Winnipeg Free Press) “fluid and delicate legato, clear phrasing, great agility, and excellent sense of rhythm” (Le Soleil, Québec City). A native of Saskatoon, he received a Bachelor of Music degree from the University of Saskatchewan where he studied with Marvin Eckroth. He holds a Master of Music degree from Northwestern University in Evanston, Illinois, where he was a student of Dr. Fred Hemke.

This season Allen will be touring western Canada with pianist David Moroz for Prairie Debut, doing a recital on the Groundswell new music series in Winnipeg, performing at the 15th World Saxophone Congress in Bangkok Thailand, and premiering a concerto for wind controller and orchestra as a part of the Winnipeg Symphony Orchestra’s New Music Festival.

Allen has had great success at music competitions at the national and international level. He won the Grand Award of the National Music Festival of Canada in 1999, making him only the second saxophonist ever to accomplish that feat. In 2000, he placed first in woodwinds at the Canadian Music Competition finals, and first in chamber music at the National Music Festival. In 2004, he was awarded the Grand Prize at the international Stepping Stone Competition. More recently, in 2006 he became the first Canadian and only the second North American ever to reach the final round of the International Adolphe Sax Competition in Dinant, Belgium. He finished in fourth place from a field of 144 of the finest saxophonists in the world under the age of 31, at this largest and most prestigious saxophone competition in the world.

As a bassoonist, Allen was a member of the National Youth Orchestra of Canada in 1998. He has played bassoon and contrabassoon with the Saskatoon and Regina Symphony Orchestras, and is currently a regular extra with the Winnipeg Symphony Orchestra. He plays second bassoon for the Manitoba Chamber Orchestra, and is a busy freelancer with other groups in and around Winnipeg.

With his duo partner Laura Loewen (piano) he has performed at the last two World Saxophone Congresses (Minneapolis 2003, and Ljubljana, Slovenia 2006), and the last three North American Saxophone Alliance Biennial Conferences. In the 06/07 season they completed a two week recital tour through Atlantic Canada for the Debut Atlantic series. In December 2007 they toured western Canada and recorded their first CD at the Banff Centre of the Arts featuring Canadian works for saxophone and piano. They are committed to thoroughly exploring the existing saxophone/piano repertoire while actively commissioning new works.

A graduate of the Juilliard School, Winnipeg-born pianist David Moroz enjoys a career as one of Canada’s most versatile artists. As a soloist he has performed in every major Canadian city, and as a collaborative artist he appears regularly in recital with Canada’s most distinguished musicians. Twice nominated for Manitoba’s Artist of the Year, he is a frequent guest of CBC Radio and is a veteran performer at Canada’s most important music festivals.

David Moroz was awarded a Doctor of Music degree from the University of Montréal, and holds both Bachelor and Master of Music degrees from the celebrated Juilliard School in New York City. He has been Artistic Director of The Winnipeg Chamber Music Society since 1987, and served as Assistant Program Director for Music & Sound at The Banff Centre from 1995-99. A gifted and dedicated teacher, he was appointed to the University of Manitoba’s Faculty of Music in 1999, where he is Chair of the Piano Department, and teaches piano, piano repertoire and chamber music. In 2000, he was invited to serve as Coordinator of the Piano Department at The Morningside Music Bridge at Mount Royal College in Calgary.

He appears regularly in recital with his wife, the outstanding Canadian violinist Gwen Hoebig, and has been a member of the Hoebig/Moroz Trio since 1979, where he has performed much of the significant music written for piano trio. He has performed for the Governor General of Canada, and in 2002 was a featured soloist in a Celebratory Concert marking the Golden Jubilee of the reign of Queen Elizabeth II, which was performed in her presence and telecast live across Canada. In the 2003-2004 season he gave a highly successful tour of Manitoba, Saskatchewan and Alberta for Prairie Debut with violinist Erika Raum.

David Moroz made his debut in Shanghai in the summer of 2006, performing a recital with the acclaimed American cellist Lynn Harrell and the Dvorak quintet with the Shanghai String Quartet. Most recently he appeared in recital with the renowned Taiwanese-American violinist Cho-Liang Lin, and last season made his debut with the Dallas Symphony Orchestra, performing as solo pianist in Alexander Scriabine’s legendary score Prometheus.