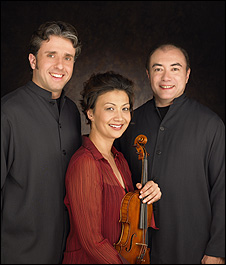 Prairie Debut is pleased to announce that for this 10th Anniversary Celebration Tour, the Gryphon Trio will be joined by PD’s alumnus Barry Shiffman, former member of the St. Lawrence String Quartet who will be taking the position of Director of Music Programs for The Banff Centre.

Mr. Shiffman’s relationship with the members of the Gryphon Trio and his commitment to this tour will now truly make this an Prairie Debut ENCORE TOUR as the St. Lawrence String Quartet was the very first to toured in the inaugural Prairie Debut 1997/98 season.

Touring internationally since 1993, the JUNO award-winning Gryphon Trio has been described by The Globe and Mail as “one of the best ensembles of its kind in the world.” They have developed a name for themselves on an international scale: “The Gryphon Trio represents a perfect conjunction, where a “national trio” on a “national label” achieves a musical consistency which puts it among the major players in the international scene in this field.” (Classics Today France)

Based in Toronto, the Trio tours regularly throughout Canada and the United States, as well as internationally. To date, they have performed in Finland, Germany, France, Belgium, Mexico, Russia, Poland, Greece and Egypt. The coming season will see the European debut of the Trio’s groundbreaking multimedia production of Christos Hatzis’s Constantinople. The Royal Opera
House will present Constantinople in the Linbury Studio as part of their ROH2 series in March 2007.

Since 1998, the Gryphon Trio has been Ensemble-in-Residence at the Music TORONTO chamber music series. Jamie Parker, Annalee Patipatanakoon and Roman Borys all teach at the University of Toronto – Faculty of Music. Dr. Parker is the Rupert E. Edwards Chair in Piano Performance.

The Gryphon Trio has recorded for the Analekta label.

“…dynamics of unusual depth and variety…”
– The Washington Post

“Is there a better chamber ensemble in Canada than the Gryphon Trio? There is not.”
– Ottawa Citizen

“All three members of the Gryphon Trio are award-winning musicians in their own right; together they are a powerhouse.”
– Maui News

The Gryphon Trio is represented by Andrew Kwan Artists Management, Toronto, ON.

Canadian Barry Shiffman began his violin studies at the age of six under the guidance of his father, himself an amateur musician. By fifteen, Barry made his Toronto Symphony debut under conductor Andrew Davis, and has since appeared with orchestras and in recitals across Canada. In 1989 Mr. Shiffman co-founded the St. Lawrence String Quartet. As a member of this ensemble together, they have performed over 1600 times in the past sixteen years and has established itself among the world-class chamber ensembles of its generation. In 1992, they won both the Banff International String Quartet Competition and Young Concert Artists Auditions, launching them on a performing career that has brought them across North and South America, Europe and Asia. With the St. Lawrence String Quartet, they recorded exclusively for EMI / Angel Classics.

After completing his degree in Music Performance from the University of Toronto, Mr. Shiffman studied for one year in the Netherlands with the assistance of The Canada Council. With the St. Lawrence Quartet, he served as Graduate Ensemble in Residence at both The Julliard School and Yale University, and spent several summers at the Banff Centre for the Arts. In recent seasons Mr. Shiffman has become increasingly interested in the repertoire of the viola, and has performed as a violist at several summer festivals including Spoleto USA, Newport, San Miguel de Allende Mexido, and Festival Consonnance in St. Nazaire France.

Barry Shiffman was appointed director of music programs at The Banff Centre on November 4, 2005. He will complete the Australian tour with the St. Lawrence String Quartet and will join the Centre on a full-time basis starting September 2006. Barry is married to Robin Fribance, whom he met while performing for the Music in the Morning Concert Series in Vancouver.