“The ears of audiences were first caressed by silky notes, a light music reminiscent of a flowing stream on a beautiful summer day. It was the swing, during which it was fascinating to watch the pianists, moving in unison, while gliding their fingers over the keyboard. Enchanting.”
-Le Quotidien 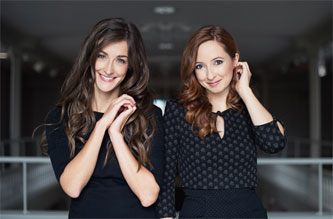 Duo Fortin-Poirier, featuring pianists Amélie Fortin and Marie-Christine Poirier, has been heralded as one of the most promising of its generation. Graduates of the Université de Montréal with a master and D.E.S.S. (Specialized Graduate Diploma) under the direction of Jean-Eudes Vaillancourt and Paul Stewart, each pianist has won several awards and grants individually before making their debut as a duo team in 2005. They immediately developed an extraordinarily powerful ensemble, and with their very similar piano artistry, a remarkable musical union was born. Their dynamism does not go unnoticed and their lively and explosive style is impressive.

Since its creation, Duo Fortin-Poirier has given many concerts in Canada as well as abroad. The two pianists are grant winners of the Office Franco-Québécois pour la Jeunesse (2005), the Conseil des Arts et Lettres du Québec (2009-2010), the Canada Council for the Arts (2011-2013), and they have also won First Prize at the Concours de Musique Clermont-Pépin, the Festival de Musique du Royaume as well as the Canada Music Competition.

Very active on the Quebec scene, Amélie Fortin and Marie-Christine Poirier created a wonderful program titled Vingts doigts et un piano concert in 2008 and they have since performed it throughout Quebec. It was the first classical concert selected to take part in the Entrées en Scène Loto-Québec for 2013-2014. In 2014-2015, the Duo Fortin-Poirier will be in residence at the prestigious Chapelle Historique du Bon-Pasteur.

Their first CD, Vingt doigts et un piano, released at the end of November 2013, and can be heard on Ici Radio-Canada Première, Espace Musique and Radio Classique Montreal and Quebec.

The Duo Fortin-Poirier has been heralded as one of the most promising piano duos of its generation. With an intuitive musicianship, this young duo has an extraordinarily natural partnership that has quickly garnered acclaim. Their concert program titled Mémoires, features works for one piano, four hands from across the classical, tango, and ragtime genres. Exploring the theme of memories, the program weaves between the intensity of Piazzolla’s tangos, the lyricism of Rachmaninov, and the liveliness of Samuel Barber. Mémoires is a concert that blends hard-driving rhythm with sweet nostalgia, resonating with audiences who will remember the dynamism of Duo Fortin-Poirier.

As of July 21, 2016. Performance dates and venues are subject to change. Full length concerts, schools shows, workshops & master classes may be scheduled in addition to the concerts listed.