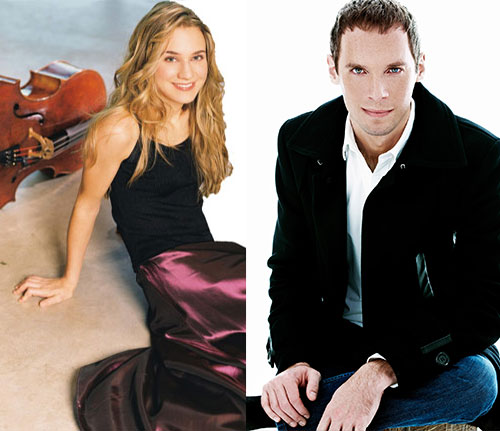 One of the most captivating young artists of her generation, cellist Denise Djokic has thrilled audiences and critics worldwide with the passion, vigour, and sensitivity of her playing.

Already one of North America’s most sought after soloists, she has performed as guest soloist with every leading orchestra in Canada, including the orchestras of Toronto, Vancouver, Montreal, Calgary, and the National Arts Centre Orchestra. She has also appeared with many orchestras in the United States and in Mexico, including the Buffalo Philharmonic, Omaha Symphony, Santa Cruz Symphony, and the Orquesta Filharmonica UNAM of Mexico City.

As a recitalist and chamber musician, Denise performs throughout North America and Europe. She has performed at the Phillips Collection and the museum for Women in the Arts in Washington, D.C., and has also performed in San Francisco, Cologne, Mexico City, San Miguel de Allende, at Chicago’s Dame Myra Hess Series, at Bargemusic and with the Jupiter Symphony Chamber Players in New York, in addition to all major Canadian centers. Her avid involvement in chamber music brings her to many festivals yearly, including the chamber festivals of Caramoor, Ottawa, Vancouver, Park City, Parry Sound, Domaine Forget, and Ravinia.

Denise has toured Canada extensively, during which she was featured as the subject of the documentary film “Seven Days, Seven Nights”, which aired on Bravo TV and was screened at the Atlantic Film Festival. She was also named by MacLean’s magazine as one of “25 Young Canadians who are changing our World”, and by ELLE magazine as one of “Canada’s 30 most Powerful Women”.

Denise’s debut recording was released in 2002 on the Sony Classical label to great critical acclaim, and won her an East Coast Music Award for “Best Classical Recording of the Year”. During the same year, Denise was a featured performer at the 2002 Grammy Awards. She recently released her second recording, entitled “Folklore”, on the Allegro/Endeavor label, which was featured on NPR’s renowned “All Things Considered” program.

Born in Halifax, Nova Scotia, into a large musical family, Denise began her studies with Olive Shaw and Shimon Walt. She is a graduate of the Cleveland Institute of Music’s “Young Artist Program”, where she was a student of Richard Aaron, and later continued her studies in Boston with Paul Katz and Laurence Lesser. Denise has been a recipient of several grants and prizes from the Canada Council for the Arts, and is grateful for their generous and continuing support.

“Djokic had a lot to say, and she said it with poise and power…” – The Washington Post

“Djokic’s art, musicianship and seamless craft are simply beyond price… Her meticulously perfect intonation, the unshaken evenness of her sound, the energy and exactness of her rhythm all poured out of her cello as though she had awakened a goddess.” – Halifax Herald

Pianist David Jalbert is one of the most firebrand talents of the new generation. With his personal style, incomparable stage presence and refined ear, he has convinced audiences and critics everywhere in North America : “a deeply musical pianist” (Cleveland Plain Dealer), “an important talent” (The Montreal Gazette), “Jalbert dazzles with skill, style and taste…with all the exuberance and finesse a listener could want” (The Toronto Star). His first solo disc, dedicated to the works of Corigliano and Rzewski, was launched to great applause on Endeavour in 2004, and is now followed up in 2006 by an equally successful recording of Fauré’s complete Nocturnes. David Jalbert has also recorded two cello and piano discs with his long-standing musical partner Denise Djokic, the first for Sony Classical in 2002, and the second for Endeavour in 2005 (Folklore, nominated for a Juno Award and listed in the top 15 of the Billboard charts), as well as a CD with French Hornist Louis-Philippe Marsolais for the German label Oehms Classics. Mr. Jalbert also performs with his dynamic piano trio (with violinist Jasper Wood and cellist Yegor Dyachkov) under the name “Triple Forte”. Other collaborations have included the Quatuor Alcan as well as pianists Anton Kuerti and Naida Cole.

David Jalbert has been a guest soloist with many great orchestras, such as the Montreal Symphony, the Vancouver Symphony, the Toronto Symphony, the Winnipeg Symphony, the National Arts Centre Orchestra, the CBC Radio Orchestra and the National Symphony of Ireland, and has collaborated with conductors like Skitch Henderson, Bramwell Tovey, Yannick Nézet-Séguin, Jacques Lacombe, Marc David, Dmitry Liss and Mario Bernardi. He has performed in Canada, the United States, Mexico and Europe and his vast repertoire stretches from Bach to Ligeti in solo as well as in chamber music. Mr. Jalbert’s interests in literature, cinema, rock n’roll and blues shine through his musical selections, which can be heard regularly on CBC Radio and Radio-Canada broadcasts.

David Jalbert holds two “Artist Diplomas”; one from the Juilliard School in New York, the other from the Glenn Gould Professional School in Toronto. He received his Masters Degree from the Université de Montréal at age 21, along with the Gold Medal of the Governor General for the highest results of all of the University’s graduate students. His main teachers have been Jerome Lowenthal, Marc Durand, André Laplante and Pauline Charron. He has also worked with Leon Fleisher, John Perry, Claude Frank, Gilbert Kalish and Marylin Engle.

“Jalbert’s piano playing is remarkable for its sweep, confidence, sensitivity, power and color, what more can we ask?” – Fanfare

“After being held in a 76-minute thrall by young Quebec pianist David Jalbert’s latest disc, there don’t seem to be enough adjectives to describe the beauty of this experience.” – Toronto Star