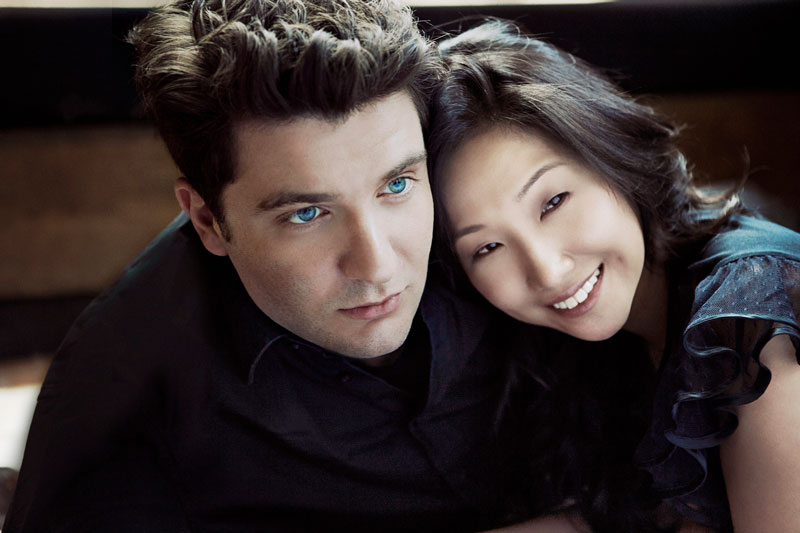 “Theirs is a marriage of wondrous colours and dextrous aplomb, subtly balanced to make a musical performance sound as one”
-Music and Arts, UK

“Chung and Bax play memorably as one”
-International Piano

Between themselves, they have performed with over 130 leading orchestras such as the London Philharmonic, Montreal Symphony Orchestra, NHK Symphony, BBC National Orchestra under the direction of conductors such as Sir Simon Rattle, Charles Dutoit and Krzysztof Penderecki. As recitalists, they have performed at New York’s Carnegie Hall and Lincoln Center, London’s Royal Festival Hall and Wigmore Hall, Washington’s Kennedy Center, and Tokyo’s Suntory Hall. They met at the 1997 Hamamatsu Competition, and began a friendship that eventually led to their marriage in 2004. In 2003, the Ottawa Chamber Music Festival had the brilliant idea to put them together as a piano duo at the National Arts Centre NAC for their Piano Extravaganza, where their performance was hailed as “a lucid and deeply moving musical experience” (American Record Guide).

Since then, the two-piano and piano-four-hand format has become an important addition to their solo careers. They have recently expended their repertoire to include the wonderful works for two pianos and orchestra of Bach, Mozart, Poulenc, Saint-Saëns and John Adams which they have performed with the Israel Chamber Orchestra, the Fort Worth Symphony Orchestra, Irving Symphony Orchestra, South Dakota Symphony, New Philharmonic Orchestra, Greater Dallas Youth Orchestra, and EurOrchestra di Bari. 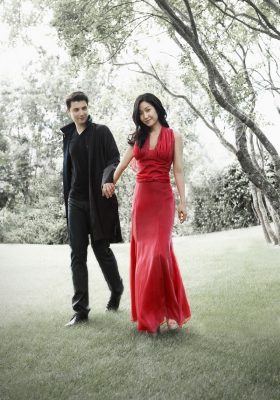 They have performed together on the world’s most prestigious platforms in the United Kingdom, Spain, Germany, Italy, Switzerland, Israel, Palestine, Korea, China, Barbados, Aruba, Guatemala, USA and Canada. Festival appearances include the Verbier Festival in Switzerland, the opening concert of the Chungmu Hall in Seoul, Korea, the Pau Casals, Castilla y Leon, Denia, Alicante, and Pamplona International Festivals in Spain, the Felicja Blumental Festival in Tel Aviv, the Lübecker Kammermusikfest in Germany, EurOrchestra Piano Festival in Italy, Ottawa Chamber Festival in Canada, Bravissimo Festival in Guatemala, Aruba International Piano Festival, the Bard Festival and Dakota Sky Festival in the US.

They recorded the complete works of György Ligeti for piano four hands as well as two pianos on the Dynamic label, which garnered the maximum R10 Classica from the French magazine Répertoire and 5 Stars from Fono Forum in Germany. They also released Saint-Saëns’ Carnival of the Animals with the Fort Worth Symphony Orchestra under Miguel Harth-Bedoya and Michael York as narrator in 2006. Their live broadcast performances of the Rachmaninov Suites and Stravinsky’s own astonishing four-hand version of his complete ballet Petrouchka on CBC/Radio-Canada, have established them as one of the most dynamic and brilliant young Canadian piano duos of their generation.

As committed educators at Southern Methodist University in Dallas and as co-artistic directors of the Joaquín Achúcarro Foundation, they know how important it is to nurture our future audiences and foster the local talent. As co-artistic directors, they organize 8-12 master classes a year at the local arts high school in Dallas and have created an international platform for young artists, by promoting recitals in Spain and the USA with the help of the Spanish Embassy and local consulates.

Giving back has always been a priority in their lives and they feel fortunate to be doing this together as fellow partners in life and music. They have given master classes at reputable institutions such as New York University, the International Keyboard Festival at Mannes, Cornell University, University of Kansas in Wichita, Southern Methodist University and Texas Christian University, to name a few.

They have also served together on juries of international piano competitions in North and South America. They found that people tend to connect to them in a more immediate way as a duo couple. They identify with them first as individuals: woman and man, and then as a successful couple both personally and professionally.

With the Bax/Chung duo, the concert becomes a unique experience, “a perfect combination and balance of unity of thought and individual personalities”, filled with their passion for music and zest for life.