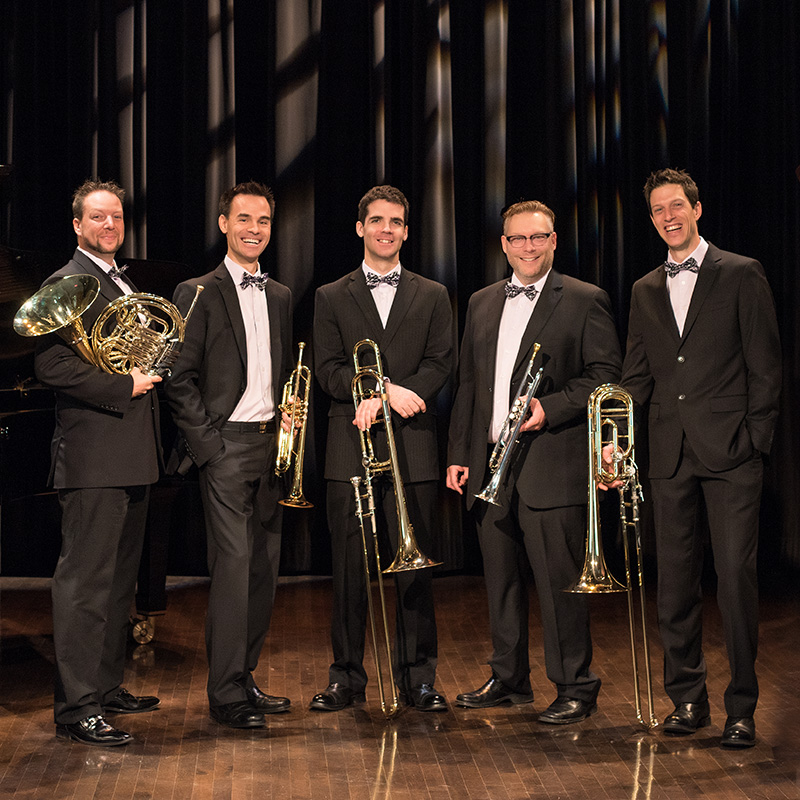 Have you heard the buzz? Brass takes on a fresh shine with dynamic performance and fresh, stimulating interaction, as classics you know and love are reinterpreted through trumpet, horn and trombone. With a knack for creating engaging concerts which appeal to a wide audience, Buzz Brass is establishing itself as an adept Canadian brass quintet.

The group has taken top awards at the Prix Opus (Opus Awards) and the Association québécoise de l’industrie du disque (ADISQ) and the Trille Or Awards, and were among the Top 10 Picks at the Edinburgh Fringe Festival | The History of Music.

Capable of transporting audiences from familiar classical masterworks to peppy ragtime-era tunes through to the jazz of Gershwin and a dreamy, poetic treatment of Satie’s Gymnopédie No. 3,  Buzz Brass has collaborated with established symphony orchestras including those of Gatineau, Winnipeg, Quebec City and Ottawa’s National Arts Centre Orchestra.

This is brass at its best, delivered with intelligence, whimsy and skill.

“The musical environment they create radiates with a bright and golden glow …. memorable melodies such as Satie’s Gymnopédies and Dvorak’s famous American Quartet (originally for strings) find themselves enhanced, almost sharper.”

Since 2002, this ensemble has captivated classical music lovers across the globe, and established a reputation for innovative programming, praise-worthy recordings, and a unique repertoire and vision for classical brass performance. Venues have included Edinburgh’s 2015 Fringe Festival, Beijing’s 2016 Meet in Beijing Arts Festival, New York’s 2018 Chamber Music America, Arts Northwest Conference 2019 and Pacific Contact 2020, as well as three invitations to perform for young audiences in China. The numerous awards and distinctions that Buzz Brass has earned over the years attest to both the quality and the relevance of the music.

Whether on their own or alongside guest musicians, Buzz Brass’s highly original performances never fail to make a positive impression. Recent Buzz projects have included partnerships with symphony orchestras in Gatineau, Sherbrooke, Winnipeg, and Quebec City, and with Ottawa’s National Arts Centre Orchestra. The quintet has recorded six albums, with more releases planned.

“A first-class brass quintet, with a likeable flair for humour and for pleasing a crowd without uttering a word.”